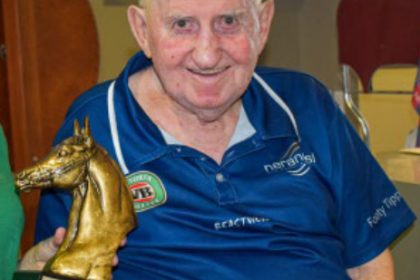 Meet Wayne, or ‘Poppy’, as he’s affectionately called. A nickname that was originally given to him by children of a staff member, safe to say the name has stuck, with old and new staff members alike now calling him Poppy.

A Nerang local for 75 years, Wayne has been an integral part of the club since its inception and he is one of our very first members.

“I’ve been around since the club first started and was one of the first social members. I was allowed membership because my dad was a serving member,” he said.

“There were only about 500 members when it started and I knew pretty much everyone,” he said.

“These days the member numbers are much higher and there are so many new faces around, which is great.”

Wayne also served as a Board member in the early to mid-1990s and was heavily involved in shaping the club to where it is today.

His favourite thing about Nerang RSL? While in his earlier days he enjoyed the live bands (and the occasional boogie), Wayne says it’s all about the location, the company and whisky – of course!

“The staff are great and I really enjoy the company of the members. I used to enjoy their selection of Bundy Rum but these days I’m enjoying the Monkey Shoulder Whisky!”

Not only is he a club favourite, Wayne is also a very talented punter, taking away the Punter of the Year Award for 2019.

“The punters club is great to be a part of regardless of the result, and I really enjoy the 1st Saturday of the month when there is a BBQ so we can catch up and see which of the 6 clubs is winning
– we are a little competitive!”

His tips? Go with your gut, says Wayne.

“The secret is to not overthink it. Trust your first impression and back it!”