0
Wednesday, 11 December 2019 / Published in Community, Staff Member of the month 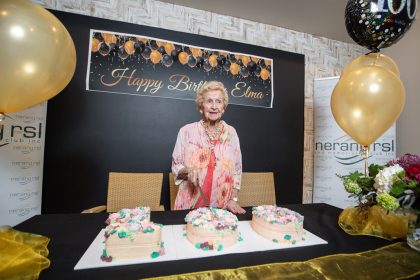 Elma Wilkinson has visited the Nerang RSL every Friday for a spin on the pokies and a spot of lunch for an impressive 26 years running and was honoured on Friday, October 18 at the club ahead of her 100th birthday at a special morning tea with her nearest and dearest.

Andrew McInnes, General Manager of Nerang RSL, says Elma is a much-loved member of the club.

“It’s long-time members like Elma that truly exemplify what it means to be part of an RSL,” he said.

“By taking an active role in her local community for close to three decades, it’s amazing to see the sheer amount of friends she has made and the connections forged with all the staff.

“She is very much adored by everyone and is truly part of the furniture.

“Elma has visited every single Friday for a total of 26 years running, and we couldn’t be more honoured to celebrate such a huge milestone in someone’s life.

“The morning tea was our way of saying a huge thank you to Elma, and we hope she has an amazing 100th birthday celebration with her friends and family.”

Born in Coraki, New South Wales on October 19, 1919, Elma moved to the Gold Coast with her husband Christopher in 1942, who sadly passed away six years ago.

The couple spent 71 years in marital bliss and after Christopher’s retirement bought a Volkswagen Kombi Van and spent time around Australia fossicking for gemstones.

“We wanted to make this mum’s most special birthday yet,” she said.

“It was fantastic to see the Nerang RSL hold this wonderful event for mum and she is adored by several staff members and local visitors.”

Christine says Elma still spritely hops on board the Nerang RSL courtesy bus week after week, and is out and about every day on her own.

“She is an utter free spirit who is completely independent and doesn’t want to be cooped up at home,” she said.

“Everyone in the family jokes that if you want to see Elma, you better make an appointment – she’s never home!

“She knows everyone and is incredibly social for a woman of her age.”

We just had to share a couple of snaps from Elma’s Birthday Bash!