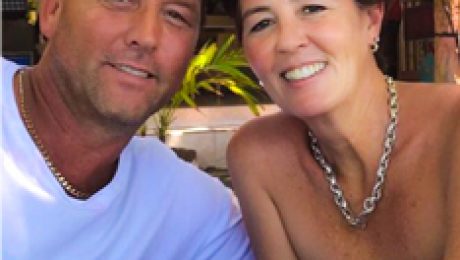 Since opening its doors decades ago, the Nerang RSL and Memorial Club has grown a small membership base into that of over 45,000 members. Each and every member is a significant part of what makes the Nerang RSL the special place it is today and our Club is lucky enough to have many members, like our member of the month, Mr Brad Catts, keen to lend a hand around the Club no matter how big or small the task.

If Brad looks a familiar face, it’s likely because you’ve seen him around the Club with a paint brush in hand, or, you’ve read about him in The Stentorian! Last month, we profiled Brad’s wife, Justine, (newlyweds – congratulations!) as our staff member of the month and she shared a little insight into Brad’s involvement at the Club (and his big kid at heart charisma and love for the Gold Coast’s annual Christmas Light competition!). We thought it was only fitting to profile Brad and we’re honoured to do so in the September edition of The Stentorian.

Brad walked through the doors of the Nerang RSL for the first time over five years ago, and he said it didn’t take much convincing to sign up as a member and call the Nerang RSL his new local Club.

“It was the club Justine and I visited years ago and we immediately loved it. the Nerang RSL was, and still is, a great place to visit and grab a bite to eat so we thought ‘why not’ sign up,” said Brad

“We’ve been members for over five years and Justine and I now work at the Club too. It’s a great environment to be part of whether working or visiting for a drink or bite to eat, and, it’s truly a family Club with a fantastic atmosphere… there’s always something happening.”

Brad runs his business Catts Purrfect Painting and Carpentry and regularly lends his skills and expertise of all things painting and carpentry to the Nerang RSL. He helps to make sure our Club is well maintained and looking its best for the community to enjoy.

“I enjoy my work at the Nerang RSL and it has been good to get to know the staff members in the process,” said Brad.

“After work, I’ll often grab a quick bite to eat while Justine is working, or when she has time off we have dinner together at the Club which is nice.”

Reaching an exciting milestone and taking a weekend off the tools to celebrate, Brad recently held his 50th birthday… with a twist!

“My friends, family and a few staff members from the Nerang RSL were invited to my 50th birthday celebration, which was actually a surprise wedding,” said Brad.

“Justine and I married underneath our Bali Hut with many of our guests watching on in surprise. It was great to see the looks on their faces because only a few family members knew, so we sprung it on many of our guests!

“It was fantastic to see everyone come together to celebrate our special day and we are all definitely a made a good night of it.” 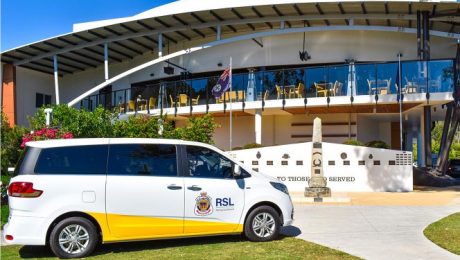 It has since received a new-look and is the First in Queensland to be adorned with the new RSL Queensland Brand Refresh ‘logo’ and has attracted some very positive feedback.

The acceptance of this vehicle was the culmination of two years persistent and dedicated work by Sub-Branch Committee personnel through the Veteran and Community Grants (V&CG) program and approved by the Honourable Darren Chester MP, Minister for Veteran Affairs and Defence Personnel. The Grant approved was for $27,243.75 to assist with the purchase of the vehicle to
reduce social isolation.

The vehicle will be and has been used for several Welfare related tasks including transportation to and from meetings as follows:

I would like to thank the dedicated and persistent efforts of our Grants Officer, Ron James, who spent numerous hours processing the necessary documentation, particularly once the administrative requirements were taken over by Department of Veteran Affairs whereby some of requirements or ‘goal post’ were changed. Ron was ably assisted by former Deputy President Stephen Cook, Secretary Dave Barnicoat and Assistant Treasurer Rod Bovill.

Sub Branch Committee expands with next generation of ex-servicemen

A new wave of ex-servicemen are joining the ranks of the Nerang RSL Sub Branch as dedicated committee members who are forging a fresh perspective on giving back to the community.

Travis Sinclair, 44, joined the Australian Army in 1995 and was medically discharged in 1999 after a horrific knee injury which led him unable to fulfill his duties.

Upon discharge, Travis worked a variety of jobs including miner and travel agent, and despite reaching out to friends and family for support, still felt a desire to fit in and meet with likeminded individuals who had gone through similar experiences.

That all changed on ANZAC Day in 2014, when Travis struck up a conversation with Nerang RSL Sub Branch committee member Mark Swain.

Travis said the inspiring chat with Mark helped him realise just how important it was to feel a sense of belonging when transitioning to civilian life.

“Mark really put things into perspective for me and explained the fantastic work the Nerang RSL Sub Branch was doing for not only ex-serving members, but also the wider community,” he said.

“I put myself up for election immediately and won a seat on the committee, which I can safely say gave me a renewed sense of duty and responsibility.

“After joining the Nerang RSL Sub Branch I finally had the opportunity to meet a bunch of stand-out lads who could really understand where I was coming from and offered the support and guidance that is so integral to life after service.”

Since commencing his role in 2014, Travis has been heavily involved with all preparations for the club’s annual ANZAC Day commemorations and has guided many young servicemen through transitioning to civilian life.

Travis said having younger members on board the committee would give ex-servicemen of similar age the confidence to reach out for support.

“There is often a stigma associated with RSL clubs that it’s a bunch of old veterans trading war stories over a few beers, which is fine but it’s not the bigger picture,” he said.

“Having younger members on the Sub Branch committee means we can relate to these young men, who often feel they don’t have anyone to talk to or don’t know the first steps in seeking advice.”

“The RSL was designed to be a support network for all ex-serving members, young and old, to come together and form a strong sense of community.”

“It’s great to see that the Nerang RSL has created a closeknit extended family where anyone can come to us for assistance, life advice or just to enjoy a fantastic social atmosphere.”

“It truly doesn’t matter if you served 20 years or 20 months, the fact is we have all been in similar circumstances and as an RSL we are here to embrace members from all walks of life.”

Travis said the best thing about being part of the Nerang RSL Sub Branch is the amount of friends he’s been able to make.

“I’ve forged so many important connections with people I otherwise wouldn’t have been able to meet,” he said.

“Life after service can often be daunting and lonely, so it’s amazing to know that there is such a close network of individuals who can all bond over similar experiences.”

“I’ve been fortunate to re-kindle old friendships from 20 years ago with some of the guys I joined with, and my role has allowed me to do that.”

“I am proud of what I achieved during my years of service and it’s my goal to help other young ex-servicemen transition easier to civilian life and offer support and guidance wherever needed.”

“Young men often feel they aren’t able to share their feelings and it’s crucial for them to know we don’t pass judgement and we are there for them when sometimes others can’t be.”

“We are all cut from a similar cloth (the defence force), so it’s an instant ice breaker to be able to forge these friendships with anyone who is feeling alone.”

“I encourage any ex-serving members who may be feeling a lack of support to come down and have a chat or come along to one of our fantastic events.” 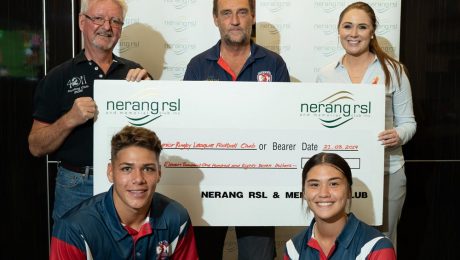 ‘Locals supporting locals’ is one way to describe the 15 year relationship between Nerang RSL and the Nerang Junior Rugby League Football Club.

The Roosters have welcomed players of all ages and abilities to join the mighty game of Rugby League for over 40 years and they’re set to build on that for many years to come with the announcement of an additional three year sponsorship from Nerang RSL.

The local club, home to over 20 teams and 300 junior players, has propelled several junior players to a representative status on the Gold Coast, Southern Division and Queensland sides – including big names such as Keegan Hipgrave, Mat Rogers, Benji Marshall and Zahara Temara, who made her Australian Jillaroos debut in 2017 and was the youngest member of the Jillaroos World Cup squad.

The Roosters received the sponsorship as part of Nerang RSL’s community fund donation program and were presented an official cheque for the first 12 months of $11,187.00 by member for Gaven, Ms Meaghan Scanlon MP.

President of Nerang Junior Rugby League Football Club, James Fitzgerald, said the club is ecstatic to continue strengthening its ties with Nerang RSL and is extremely grateful for the three year sponsorship.

“Nerang RSL and Nerang Junior Rugby League Football Club have fostered a relationship for over 15 years and it’s fantastic to see that relationship continue to move from strength to strength. The Nerang RSL is a major supporter and contributor to our club and we are extremely appreciative of past sponsorships and we are humbled to receive this additional funding,” said James.

“The funding for the first year will go towards the purchase of non-competition jerseys for our Under six to Under 12 players, Under 14 to Under 16 girls and Under 18 boys.

“If it wasn’t for the support of the community and the Nerang RSL, our club – which is a small non-for-profit organisation, would really struggle to even operate.”

The ‘locals supporting locals’ support also stems past the footy field, with both clubs often putting their hands up to help each other where they can.

“Nerang RSL has even helped to strengthen our relationship with referees and people within the community, and it’s great to see the support go both ways as the Roosters feature Nerang RSL on the front of our club jumpers, polos and on signage at our home grounds, and, not to mention, many of our members’ parents love to visit the RSL for a bite to eat after a game!

“We’ve also been involved in Nerang RSL and Memorial Club’s Anzac commemorations for the past few years and this year, a couple of our members layed a wreath at the service and were part of the March.”

“It’s fantastic to be involved with a club like Nerang RSL, which is focused on supporting the community and giving back where possible,” he said.

“It helps our club to deliver on what we set out to do which is to ultimately provide an opportunity for kids to get involved in sport and learn about teamwork and mateship, and have fun while doing so.”