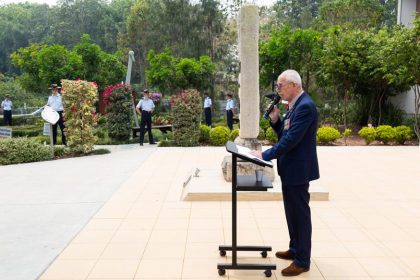 Our Nerang RSL and Memorial Club’s Sub Branch President, Mr. Stewart McGettigan, has been at the helm of Nerang RSL’s Sub Branch since 2015 and is a long-standing member of the Club since 2003. Stewart has played a momentous part in making the Sub Branch and the Nerang RSL the special place it is today and we’re proud to profile him in this month’s edition of The Stentorian.

Stewart’s outstanding commitment to running the Sub Branch and also his role as Pension and Compensation Advocate has seen him oversee several Anzac Day, Remembrance Day, Vietnam Veterans Day and other ceremonies while offering a strong network of support for veterans and their families.

He understands the importance of making support networks available to veterans and their families first hand as prior to his roles at the Nerang RSL Sub Branch, Stewart served for 29 years in the Royal Australian Air Force and was stationed in Malaysia, Thailand, Indonesia and all across Australia. Able to connect and draw upon his own experiences, Stewart is also the Nerang RSL Sub Branch’s Wellbeing Advocate and trainer and mentor to the team.

He is a passionate supporter of the Nerang RSL and says the support from the Club has been instrumental in creating a dynamic Sub Branch.

“We wouldn’t exist without the tireless support from the club and the hard work they undertake every day,” he said.

“With the efforts of Andrew McInnes, Nerang RSL’s General Manager, and his talented team, the Club has gone from strength to strength in recent years and it’s no secret that it’s a top spot for the local community to enjoy.

“All the hard work the team puts in is directly responsible for keeping the Sub Branch going and ultimately allowing us to help more and more families in the veteran community.

“You couldn’t possibly meet a better group of staff who are always willing to have a conversation and help with anything you need.

“On Fridays, I get together with the boys and have a few beers, and it’s always a pleasure to take part in the warm and inviting social atmosphere at the Club.”

Stewart is looking forward to this year’s Remembrance Day ceremony, where he will be giving a special opening address, and says it will be a touching tribute to those who fought and lost their lives in honour of their country.

“It’s an incredibly important day in which we gather to pay our respects to fallen servicemen and servicewomen who helped shaped the country for what it is today,” he said.

“This historic day is significant to not only servicemen and veterans, but to all Australians who are lucky to call this wonderful country home.

“We hope to see a large turnout this year of the back of last year’s terrific event, and look forward to honoring our servicemen and servicewomen, past and present.”

Nerang RSL Remembrance Day ceremony takes place on November 11, commencing at 10:30am at the Club.