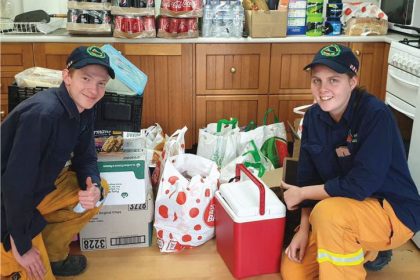 Lifelong Nerang resident Kim Bruhn is no stranger to the local community, volunteering countless hours of her own time to give back to the suburb she calls home.

Kim, who has worked as a contracted cleaner at the Nerang RSL for over five years, is most recently the driving force behind a huge charity effort to help those in need suffering from the recent bushfires.

Living in Mount Nathan, Kim saw the destruction the fires were causing in neighbouring rural areas and put in a word to Nerang RSL General Manager, Andrew McInnes and Club President, Terry McDonald, to suggest a call-out to the public to donate non-perishable foods and drinks to be donated.

Kim’s efforts saw a huge outpouring of support from the local community, so much so the rural fire brigades from Canungra and Gilston/Advancetown ran out of room to store the donated goods!

Even more still, Kim personally drove the goods out to the rural fire brigades to show her community spirit.

Kim says giving back is important to her and she loves to do whatever she can to help the local community.

“It was a no-brainer to see what I could do for the fire-affected communities, given they are so close to home,” she said.

“I was amazed to see the overwhelming level of support we had from the whole local community, and it’s a testament to the Nerang RSL for doing their bit to help in this awful situation.”

Kim also volunteers her time as treasurer for the Nerang State School P&C and oversees the raising of funds for new equipment for the students.

Kim, who has overseen several changes to the Nerang RSL in recent years, said the club still retains its warm, close-knit community atmosphere.

“The building may have undergone a facelift, but what makes the Nerang RSL club great is the members and staff who fill its rooms,” she said.

“It’s always lovely to come to work and see no shortage of families enjoying the social environment or the staff with smiles on their faces.

“It truly is the last of the great RSL clubs across Australia, with the community at its very heart.”

It’s safe to say Kim is our very own ‘community hero’ and we couldn’t be happier to have her as a club member and a dedicated, hard-working member of staff

Thanking you for your ongoing efforts, Kim!