Sub Branch Committee expands with next generation of ex-servicemen 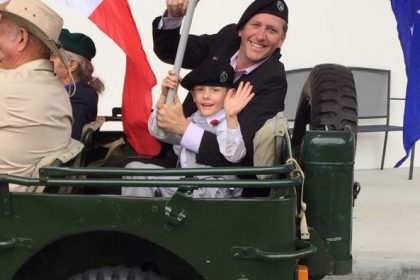 A new wave of ex-servicemen are joining the ranks of the Nerang RSL Sub Branch as dedicated committee members who are forging a fresh perspective on giving back to the community.

Travis Sinclair, 44, joined the Australian Army in 1995 and was medically discharged in 1999 after a horrific knee injury which led him unable to fulfill his duties.

Upon discharge, Travis worked a variety of jobs including miner and travel agent, and despite reaching out to friends and family for support, still felt a desire to fit in and meet with likeminded individuals who had gone through similar experiences.

That all changed on ANZAC Day in 2014, when Travis struck up a conversation with Nerang RSL Sub Branch committee member Mark Swain.

Travis said the inspiring chat with Mark helped him realise just how important it was to feel a sense of belonging when transitioning to civilian life.

“Mark really put things into perspective for me and explained the fantastic work the Nerang RSL Sub Branch was doing for not only ex-serving members, but also the wider community,” he said.

“I put myself up for election immediately and won a seat on the committee, which I can safely say gave me a renewed sense of duty and responsibility.

“After joining the Nerang RSL Sub Branch I finally had the opportunity to meet a bunch of stand-out lads who could really understand where I was coming from and offered the support and guidance that is so integral to life after service.”

Since commencing his role in 2014, Travis has been heavily involved with all preparations for the club’s annual ANZAC Day commemorations and has guided many young servicemen through transitioning to civilian life.

Travis said having younger members on board the committee would give ex-servicemen of similar age the confidence to reach out for support.

“There is often a stigma associated with RSL clubs that it’s a bunch of old veterans trading war stories over a few beers, which is fine but it’s not the bigger picture,” he said.

“Having younger members on the Sub Branch committee means we can relate to these young men, who often feel they don’t have anyone to talk to or don’t know the first steps in seeking advice.”

“The RSL was designed to be a support network for all ex-serving members, young and old, to come together and form a strong sense of community.”

“It’s great to see that the Nerang RSL has created a closeknit extended family where anyone can come to us for assistance, life advice or just to enjoy a fantastic social atmosphere.”

“It truly doesn’t matter if you served 20 years or 20 months, the fact is we have all been in similar circumstances and as an RSL we are here to embrace members from all walks of life.”

Travis said the best thing about being part of the Nerang RSL Sub Branch is the amount of friends he’s been able to make.

“I’ve forged so many important connections with people I otherwise wouldn’t have been able to meet,” he said.

“Life after service can often be daunting and lonely, so it’s amazing to know that there is such a close network of individuals who can all bond over similar experiences.”

“I’ve been fortunate to re-kindle old friendships from 20 years ago with some of the guys I joined with, and my role has allowed me to do that.”

“I am proud of what I achieved during my years of service and it’s my goal to help other young ex-servicemen transition easier to civilian life and offer support and guidance wherever needed.”

“Young men often feel they aren’t able to share their feelings and it’s crucial for them to know we don’t pass judgement and we are there for them when sometimes others can’t be.”

“We are all cut from a similar cloth (the defence force), so it’s an instant ice breaker to be able to forge these friendships with anyone who is feeling alone.”

“I encourage any ex-serving members who may be feeling a lack of support to come down and have a chat or come along to one of our fantastic events.”