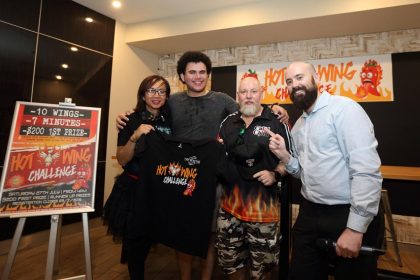 It was Hot Wings GALORE at the Nerang RSL last month with our Hot Wings Challenge attracting food fanatics, competitive eaters and lovers of the wings to the RSL in an attempt to tackle the wings and claim victory as king or queen of the Hot Wings.

20 competitors took to the stage to do their best damage and finish TEN full-sized wings in seven minutes. The Hot Wings were well and truly HOT made by Head Chef Jason Blond using a concoction of Blair’s Death Sauce Australia products mixed with loads of the world’s hottest chilli “The Carolina Reaper”, putting competitors to the ultimate test.

The competition saw the return of the renowned Chad ‘Froman’ Jones who made history as Nerang RSL’s first Pig Out Pie Eating Contest held on Australia Day this year. Chad proved the Hot Wings were no challenge as he devoured all 10 insanely hot wings in 1:52 to take out first prize of $300 cash and Hot Wing champion Hat & Shirt.

Close behind was Michael Harrison scoring $75 cash plus hat & shirt and finishing not long after and in third place, was Hendrika who took home $25 plus merchandise.

The atmosphere was absolutely electric as the crowd cheered on our competitors who put on their bravest faces. It was a fantastic afternoon for all and all the photos from the day can be found on our Facebook Page plus each wave of the competition can be seen on our YouTube Channel.