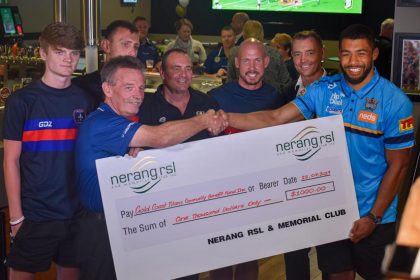 The Nerang RSL presented a one thousand dollar cheque to the Gold Coast Titans in support of their Physical Disability Rugby League Team and welcomed three super league players from Wakefield Trinity, who flew from the United Kingdom, to attend Big Talk and play against the Gold Coast Titans Physical Disability Rugby League team (GCTPDRL) in a curtain-raiser game prior to the Titans taking on the Broncos at CBUS Stadium last month.

The Nerang RSL’s Big Talk night was BIG indeed with guests not only sharing in some banter, a barbeque and some bevies, but also the opportunity to listen to Wakefield Trinity’s Darren Dean, Connor Lynes and Ben Nicholson share about their physical disabilities, passion for Rugby League and life beyond the footy field.

Nerang RSL Board Member – and footy fanatic, coach of league referees and the night’s official emcee – Lloyd Evans, said the Nerang RSL was pleased to present the Titans with a cheque and welcome Darren, Connor and Ben for a fantastic night in support of the Men of League Foundation.

“The recent Big Talk night held at Nerang RSL was one for the history books! It was fantastic the Nerang RSL was able to present a cheque to the Titans in support of their Physical Disability Rugby League Team and have Gold Coast Titans CEO Steve Mitchell, Executive Chairman Dennis Watt, Community and Game Development Officer Renee Cohen and their latest signing, English International Kallum Watkins at the RSL. It was also nice to
see the local community come together to hear Darren, Connor and Ben, all the way from the UK, share their stories and passion for Rugby League,” said Lloyd.

“The Nerang RSL is proud to be able to provide a donation to help with the costs associated with hosting a physical disability game. There are many individuals who can’t partake in League at high-end levels because of
physical disability, whether due to aspects like Cerebral Palsy or injury resulting from an accident, and, as part of their community work the Gold Coast Titans formed the Physical Disability Rugby League team which allows players with physical disability to get involved in modified games, be part of a team and have some fun on the footy field.

“Big Talk also saw the likes of English fullback Paul Charlton, halfback for Australia Dennis Ward, centre for Australia Bob Honan and New Zealand half-back Graeme Farrar join us. It was fantastic to see the Rugby League community, and the wider community, come together to enjoy all the night had to offer while raising money for the Men of League Foundation.”

Following Big Talk at the Nerang RSL, Darren, Connor and Ben were treated like NRL royalty.

“The boys took to the field and played against the GCTPDRL team as part of the Legends team, which in the past has included the likes of Scott Prince and Preston Campbell, in a curtain-raiser before the Titans took on the Broncos at CBUS Stadium last month,” Lloyd said.

“It was great to see the excitement and the smiles on the boys’ faces as they took to the field to partake in a sport they love.

“Darren, Connor and Ben were also taken under the wing of the Melbourne Storm, who kindly gave the boys a unique game-day experience, including a tour of the Storm’s dressing room before their game against the Titans last month.”

Lloyd said the Nerang RSL, a community-centric club, couldn’t pass up the opportunity to support the boys on their adventure ‘Down Under,’ invite them to Big Talk, and, showcase the Club’s support for GCTPDRL.

“It was humbling to play a part in Darren, Connor and Ben’s experience in Australia and great to know that we’ve been able to assist the GCTPDRL,” said Lloyd.

“The Nerang RSL is ecstatic both parties came along to our Big Talk night, which is always held in support of a great cause. The Nerang RSL has donated around $30,000 to the Men of League Foundation to date and our relationship only continues to move from strength to strength.

“I encourage everyone to keep an eye out for our next event and come along. It’s always a fantastic night and everyone is welcome whether Nerang RSL members, footy fanatics, families or kids!”

For further information on the Men of League Foundation, visit www.menofleague.com