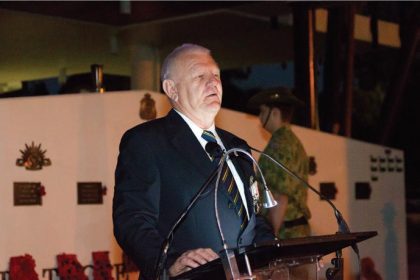 If Geoff Stephan looks a familiar face, or the name rings a bell, it’s likely because he’s been proactively involved in the Nerang RSL and Memorial Club community for decades. Geoff has been an active member and President of the Nerang RSL Sub Branch, a Club Committee Member, and Treasurer, and, is the official emcee of the Vietnam Veterans Commemoration Service to be held this month. It’s safe to say Geoff Stephan has and continues to be, a valued member of the Nerang RSL community and we’re honoured to profile our life member in the August edition of The
Stentorian.

Before making his mark at the Nerang RSL and Memorial Club, Geoff dedicated over 20 years to military service. Although originally deferring national service and leaving Sydney for Narrabri, where he got a job at the local RSL, it wasn’t long until he found himself back in Sydney and at the front door of the recruitment office for the Australian Army, Navy and Air Force.

“I walked in, signed up and returned home – and wasn’t in my father’s good books seeing as he was in the Navy, and asked why I joined the Army. I told him I could walk and run faster than I could swim,” said Geoff.

“After 21 years of service, I decided it was time for me to finish up. I bought a house in Nerang and having been a returned serviceman I knew about the local Nerang RSL and decided to join. I was only there for a little while before my wife, Yvonne, bought a shop in Mermaid Beach, so I joined another Club on the Gold Coast.

“At the time I was working for the Vietnam Veterans Federation and we moved over to Nerang, so I was happy to return back to my local, the Nerang RSL. I started to get involved in things like selling meat tray raffles, which was a great opportunity to get to know many of the members and staff.”

“I started going along to the Sub Branch meetings at the Nerang RSL and given that I was already qualified in handling pensions and pension inquiries, decided to help out and get involved at the Sub Branch wherever I could.”

From selling meat trays at the Club and attending Sub Branch meetings, it wasn’t long until Geoff stepped up as President of the Sub Branch, a role he upheld from 2006 to 2015.

“We had our share of hurdles along the way when it came to the initial expansion of the Nerang RSL. There was a bit of controversy between the Club and the Sub Branch surrounding whether to expand and although I was part of the Sub Branch, in my eyes, we could either stay in the small clubhouse, or expand and evolve, and provide a fantastic Club for the community. After much discussions and a vote, we went on with the extensions and had numerous meetings to discuss and decide what would be best for both the Club and the Sub Branch.

“I’ve really enjoyed all of my roles at the Nerang RSL and Memorial Club and am humbled I’ve been able to contribute to shaping special aspects around the club including Cenotaph. the Sub Branch at the time decided to put up a new wall because the original one was starting to fall apart and wasn’t big enough for all of the remembrance plaques. I came up with a design and the new wall went up, and, it’s great to see it standing there today with additional modifications over time by Nerang RSL’s Sub Branch.”

Geoff is now a lifetime member of the Nerang RSL and the official emcee of the Vietnam Veterans Commemoration Service which will be held at the RSL on Vietnam Veterans Day to commemorate the service of all men and women who served in Vietnam.

“When I was asked to be the emcee of the Vietnam Veterans Commemoration Service for the first time in 2018, I was very emotional and loved the idea,” said Geoff.

“I received a lot of positive feedback last year which is very humbling and I’m now going to be emceeing the Commemorative Service for years to come, until I can’t do it anymore. It’s something I really look forward to because it’s a special and important day for the community to come together to remember those who paid the ultimate sacrifice.”

“It’s great to have seen the Nerang RSL evolve into the community-centric and supportive environment and the facility it is today”, said Geoff.

“The members make it a special place and the staff are very welcoming and are great to have a laugh with. I love to come along to the Nerang RSL on a Friday, hang out in the #4211SportzBar with my mates, share a few bevies and have a good chat. My grandchildren also work at the Club too, which is quite special!”