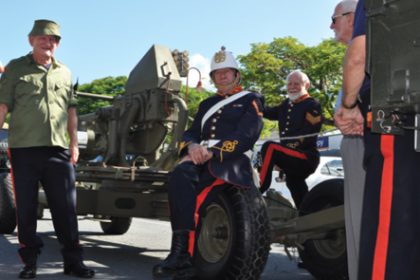 If there’s one man who knows the ins and outs of Nerang RSL and Memorial Club, it’s our inaugural member, first-ever Club President, and the Club Patron, Mr. Rodney Dux (now O.A.M!). A passion for the community and a long military career inspired Rod to first join the Nerang RSL Sub Branch more than 30 years ago.

He is now a Wikipedia on most things Nerang RSL. Rod has seen the club evolve from the vacant block of land that he was instrumental in acquiring for the first RSL clubhouse, to the bustling RSL complex it is today. A close working association with the previous Albert Shire Council was instrumental in achieving some of the early goals.

But if there’s one thing that hasn’t changed over the years, it’s Rod’s passion for the community and since we last spoke to him, he’s received a prestigious Medal of the Order of Australia (O.A.M). We’re delighted to profile our Member #1 as he takes us back down memory lane at Nerang RSL and shares what makes him tick in the July edition of the Stentorian.

Rod played an integral role in establishing Nerang RSL and Memorial Club and since, has been heavily involved in a variety of community initiatives including groups such as the Albert Australia Day Foundation whose annual event was directly supported by both the Sub Branch and the Club, the Gold Coast Australia Day Foundation, the Heritage Voice museum support initiative and the Albert Battery. In addition he is a three-time published author of well-researched works on previously unpublished aspects of the Australian Commonwealth Military Forces before and during the First World War.

As part of Queen Elizabeth 2’s Official Birthday Celebrations this year Rod was listed among the recipients of the Order of Australia Medal (O.A.M.) that was awarded for his long term contribution to the community of the Gold Coast.

“I’m very honoured to be a recipient of the prestigious Medal of the Order of Australia for my involvement across the community, it’s very much a privilege,” said Rod.

“My family and friends were naturally very proud as well and it’s quite a pleasant and unexpected experience when the effort you’ve put in over the years is recognised by such an award.”

“Having said that, without the long term support of family and friends and a peer group network, it wouldn’t be possible… it’s always a team effort and I’ve just helped to lead the way.”

One of the places he’s done exactly that is the Nerang RSL, where he played a major role in the establishment and success of the Club and lead the team to put hammer to nail in the 80’s to build what is now a beating heart within our local community.

“I became involved with the Nerang RSL and Memorial Club when I first joined as a member and soon after President of the Sub Branch over 30 years ago…back when we held our meetings in the local community hall before we had a space to call our own!” said Rod.

“We had a block of land located in what is now the industrial area of Nerang that was later deemed unsuitable for a club site. Most importantly our available funds were meagre to say the least. The decision was taken to sell the land to obtain funds and to secure a suitable block of land, preferably public land with low annual rental. After much discussion with Council and the builders/owners of the unit complex next door, a deal was struck and the existing club land portion changed ownership to the Sub Branch at no financial outlay. With a block of land and funds intact we engaged an architect.

“Among the many aspects requiring volunteer attention was the need to actually form the nucleus of a club membership of sufficient numbers to assist with licensing and other requirements. Existing Sub Branch numbers were not sufficient therefore it was quite a challenge to identify and sign up ex-service and other members for the yet to be built club. Unfortunately nothing ever runs to plan. The building budget required stretching to accommodate an unexpected contractor’s miscalculation of the number of bricks needed among other things. the council requirement back then was to build “hi-set” thereby producing an amount of useless but expensive space on the lower level. Fortunately, times have changed.

“Apart from the basic building, a number of volunteers put in the hard yards to achieve our vision of building a place of support and enjoyment for returned servicemen and women and the wider community. there were other hurdles in the process, one being Gaming Laws. Poker machines were not yet legal in Queensland therefore all revenues necessary to operate and service the debt came from food and beverage. It was quite a regular occurrence for bus loads of punters from Brisbane and the Coast to head forthe clubs in the Northern Rivers. it made a major difference when the machines were introduced in Queensland because it brought members back to local clubs like Nerang RSL and gave us the opportunity to raise extra revenue to help with the processes involved with building a functioning club that also supports the local community.”

“It’s fantastic to see the Club where it is today and full marks to the team who took over and who have built the business to what it is now,” said Rod.

“Since day one Nerang RSL has always had a passionate team behind it and its continued success I believe reflects continuity, a great committee, a fantastic CEO and an amazing team of staff.”

He’s no longer an active committee member at Nerang RSL, but Rod’s kept busy fulfilling his President-like duties through his roles as President of the Gold Coast Australia Day Foundation, Chairman of Heritage Voice and President of the Albert Battery among a number of other pursuits calling on any spare time.

As to what sees Rod continue to lend a hand within his local community, he had the following to say. “No matter how big or small the task, someone has to do it and there are so many fantastic volunteers across Australia that are involved in providing a helping hand where they can,” said Rod.

“I continue to be genuinely interested in what I do, exploring new and related challenges and the satisfaction of knowing I’ve been able to play a part in my local community and contribute to shaping successful groups such as the Nerang RSL.”