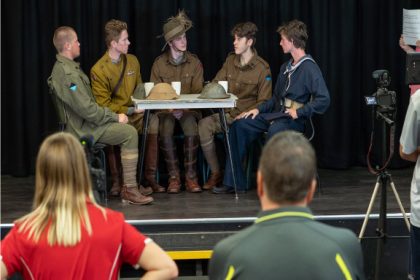 The sacrifice and selflessness of our Anzacs isn’t forgotten amongst the local younger generation with students from Nerang State High School gearing up for another theatrical performance, telling the story of the Spirit of the Anzac, to be shown at this year’s dawn service.

Preparations for this year’s video are ‘bigger and better’ than ever before with student participation and efforts at a record high. The captivating visuals and performance have become well and truly entrenched in Nerang’s service and the students’ respect and acknowledgement deepens each year.

With 2018 having marked the Final year of the Anzac Centenary, veteran and Nerang RSL and Memorial Club Sub Branch committee member, Mark Swain, said the production is a special way of highlighting the centennial anniversary of World War One (WW1) and ensuing battles and conflicts, to the declaration of the Second World War (WW11) in 1939.

“Students from Nerang State High School have been involved in Nerang RSL Sub Branch and Nerang RSL Memorial Club’s Anzac Day commemorations for the past few years and it’s heartening to see the students continue to be a part of sharing the stories behind the events that have shaped our nation and people,” he said.

“The students led the lights, camera, and action on the production which begins with a small group of veterans of the war, played by students, sitting in a cafe and sharing their experiences as veterans and how they navigated the war and survived.

“The story will not only provide insight into Australia’s involvement in WW1 but also aspects including the partition of soldiers, the homecoming, the Great Depression, Hitler coming into power and all the major battles, conflicts and campaigns of the Western Front as well as events of the Middle East.

“A nurse narrates the story and provides a raw insight of facts and statistics before the film concludes with the declaration of WW11 and a nod to the generational turnover leading into the Second World War.”

The production, which was filmed in March, has provided an opportunity for more students to be involved in Nerang RSL and Memorial Club’s Anzac Day commemorations.

“Students were able to get involved not only in front of the cameras but also behind the scenes with filming and audio, to all-things editing,” said Mark.

“It’s great to see students, alongside veterans, cadets and volunteers across the region actively involved in sharing the Anzac legacy each year.”

President of Nerang RSL Sub Branch, Stewart McGettigan, says it is humbling to see the community gather each year to pay respects to those who made the ultimate sacrifice.

“The Nerang RSL Sub Branch and Nerang RSL Memorial Club’s Anzac Day Service is renowned as one of our largest and most respected events of the year, and attracts people from as far as South-East Queensland,” he said.

“It is a significant morning of remembrance and the peaceful moments of dawn allows locals to unite and reflect upon the mateship, courage, and sacrifice of not only the original Anzacs, but those servicemen and women involved in all wars, conicts and peacekeeping operations.”

Nerang RSL Sub Branch and Nerang RSL Memorial Club’s Dawn Service will commence at 4.45am followed by an Anzac Day March at 9.40am and the main service at 10am.