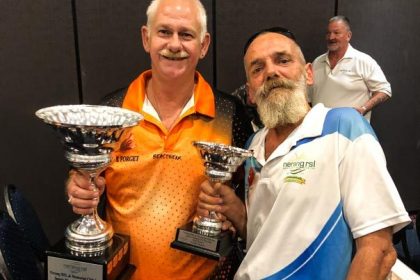 Nerang RSL and Memorial Club would like to congratulate member, Neville Thomas, who was named Sports Person of the Year for 2018 at the club’s AGM held on Sunday 17th February.

Nerang RSL Social Golf Club secretary and treasurer, Ben Hides, said Neville was nominated by the Social Golf Club for his display of sportsmanship, hard work and ongoing involvement,
and is a well-deserving recipient of Sports Person of the Year for 2018.

“If I were to go back on previous years, I could give you lots of amazing stuff Nev has done for us but when focusing on 2018, there’s definitely a few things that stand out and these
were included in Neville’s nomination for Sports Person of the Year,” he said.

“Neville volunteers his own time at each game, and afterwards, as the club’s handicapper which can often be time consuming. He keeps track of everyone’s scores and supplies his own books, folders and pens to get the job done without complaint…except of those he receives from players who get their handicap cut down when they come in with a win and pro-like scoring. It’s all in jest though and he cops it on the chin with a grin.

“Neville also assists Stretch and I by organising golfers into teams and their carts, and helps advise golfers of the rules of the game-play for the day. He has a great knowledge of the game and its official rules so depending on what games we play and where necessary, he helps the club by fixing score cards after games to ensure the correct scores are given dependent on handicaps and how hard the hole is ranked on that course.”

And it’s not just the organisational side of the game that he has a handle on, but also the green itself. Neville never missed a game in 2018 and was awarded two trophies at the Golf Club’s end of year presentations.

“These are just some of the fantastic aspects that make Neville a well-deserving recipient of this award. Neville is a great golfer, fantastic guy and a supporter of both the Social Golf Club and Nerang RSL and we’re very grateful for all he does, and the Social Golf Club is proud to see Nev named as Sports Person of the Year for 2018.”