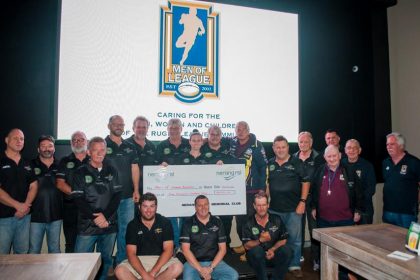 Get To Know The Man Behind The Legend, held at the Nerang RSL and Memorial Club in support of the Men of League Foundation, will return next month to see the local community gather with mateship and compassion over a BBQ, bevvies and all things footy!

The Men of League Foundation provides support to those involved in the mighty game of Rugby League at any level. Whether players, coaches and referee officials or administrators, club volunteers and beyond, the foundation provides assistance to those who have fallen on challenging times and require support from their own.

Nerang RSL and Memorial Club has been involved with the foundation for over six years and RSL Board Member – and footy fanatic, coach of league referees and the night’s official emcee – Lloyd Evans, says Nerang RSL is pleased to continue supporting the initiative.

“Within Rugby League or any part of the community, there is always going to be someone who is facing a hard time and requires help whether financial, emotional, medical or another type of assistance,” said Lloyd.

“Nerang RSL is honoured to be able to do its part in supporting fantastic initiatives like Men of League so that the foundation can continue to help change lives.

“To date Nerang RSL has donated around $30,000 through its Punters’ Club, footy tipping, the NRL Calcutta, raffles and donations raised at our annual Men of League nights.

“It’s always humbling to see the local community gather with a sense of mateship and teamwork, two pillars the game has been built on, and I have no doubt they will again for what will be Nerang RSL’s seventh season supporting the foundation.”

The night has previously attracted footy stars including Tom­my Raudonikis OAM, Ben Hannant and Chris Lawler and this year will see ex Kangaroos and Manly Sea Eagles player and past coach of South Sydney Rabbitohs, Steve Martin, take to the microphone.

Aptly named ‘Get To Know The Man Behind The Legend,’ Lloyd says the event allows the community to do just that, with plenty of snags and bevvies to go around.

“The purpose of Nerang RSL’s Get To Know The Man Behind The Legend is to raise a dollar for Men of League in a way that the community can enjoy themselves,” said Lloyd.

“People generally have an idea of what players have done throughout their career and what they’ve achieved, but often times we don’t know how they got there, about their families or events that made them who they are today.

“It’s an opportunity to get to know the player beyond the footy field and in the past our speakers have really opened up and we’ve been able to learn so much about them. It’s great to see the players often stick around to chat to the community and mingle with the members over a BBQ put on by the RSL.

“I encourage the community to come along to the next event and everyone is welcome whether Nerang RSL members, footy fanatics, families or kids! It’s a great night and what makes it even better is that it’s all in support of a fantastic cause.”

For further information on the Men of League Foundation, visit www.menofleague.com