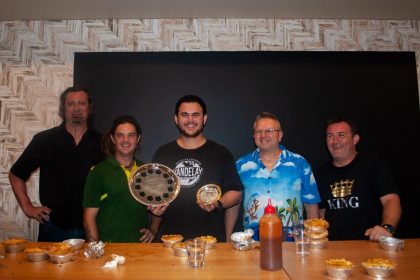 Nerang RSL’s official Pig Out Pie Eating Contest made its debut over the Australia Day weekend and local pie fanatic, Chad ‘Froman’ Jones, put on a champion show to secure the top spot in the contest, now set to be held annually at the club.

The competition saw five entrants battle it out to see who could consume six pies or be the first to finish all six of their pies – in just six minutes.

With a crowd of onlookers and supporters, pies were demolished by the minute and it was Chad, 26, who managed to scoff all six pies in an astounding two minutes and 13 seconds – with room for dessert afterward.

Chad, who has competed in a number of eating competitions across the country, says he couldn’t look past the opportunity to get involved in Nerang RSL’s Pig Out Pie Eating Contest.

“My friends tagged me in a post for the Pig Out Pie Eating Contest on Facebook so I messaged Ben at the RSL to confirm there was a place in the contest and what the rules were and it went from there,” he said.

“I went into the contest feeling quite confident and had done a couple of practice runs in the lead-up, which involved timing myself and trialing different techniques so that I could stick to the fastest tactic for the contest.

“I was focussed on eating the pies as fast as I could and although they were quite hot, I didn’t let it phase me and kept on powering through. Capacity wise it was easy and I ended up having dessert afterward,” he laughed.

Chad has made history as Nerang RSL’s first Pig Out Pie Eating Contest winner and for his champion efforts on the day, the RSL’s pie of the day for the next year has been named ‘Froman Special Pie Of The Day.’

“It is pretty awesome to have a pie named after me. I’ve won a few eating competitions before, but I’ve never had food named after me,” said Chad.

“Nerang RSL’s Pig Out Pie Eating Contest is my favourite eating contest I’ve done so far because the crowd was like no other.  Everyone was cheering us on and it was a really great atmosphere to be part of.

“I’m stoked to be the first official Pig Out Pie Eating Contest winner and I’ll absolutely be back next year!”